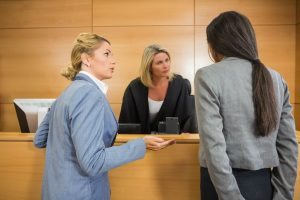 This is the next post in my series on the handling of drug trafficking cases in Phoenix, Arizona. My last article discussed challenging law enforcement’s use of confidential informants. If an arrest warrant was based on the word of an unreliable informant then it may be possible to have the charges against you dismissed. In this article I will discuss another important topic – what to expect at trial in such a case. It goes without saying that the trial’s outcome will have a substantial impact on your life. It is, therefore, crucial that you retain an experienced criminal defense attorney to assist you.

Trial in a drug trafficking case will begin with the selection of a jury. Each attorney will be given the opportunity to ask questions of potential jurors and the Judge will also ask questions. If it is clear that a potential juror cannot remain unbiased then the Court may remove them from the pool for “cause.” Both the defense lawyer and the prosecutor will be given a number of “challenges” which they may use to remove other candidates from the pool. It is not permissible to remove a candidate for reasons such as ethnicity, gender, religion, or some other protected characteristic. Once the jury has been empaneled then the trial will begin.

The prosecution will call its witnesses first. After the prosecution has presented its case then the defense will present its witnesses and evidence. The defendant may choose whether or not to testify; our system of justice does not compel a defendant to testify. After the defense has rested then the prosecution will put on “rebuttal” evidence. Rebuttal may only address issues which the defense raised during its case. At the close of evidence each side will make a closing argument and the jury will deliberate. The jurors will then return a verdict of guilty or not guilty.

It is important to understand that trial is a complicated process and that the rules of evidence will be strictly enforced. Having a lawyer familiar with the trial process is crucial. If one does not follow proper procedures then it is possible that that the jury will not hear important evidence or that the prosecution will get to present evidence which should have been inadmissible. These are just some of the reasons why you should hire an experienced defense lawyer.

Contact my Phoenix office today if you have been charged with drug trafficking. I also service Maricopa County areas such as Mesa, Glendale, Scottsdale, Chandler, and Gilbert as well as Pima County residents in Tucson.