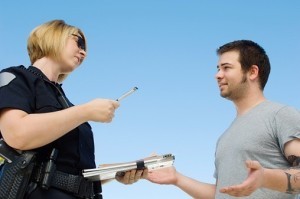 This is the next post in my series on whether Phoenix police violated one’s right to remain silent. My last article provided an overview of topics I will be discussing and stressed the need to contact a criminal defense attorney if you were arrested after speaking with law enforcement. It is important to understand that, even if you made statements which were incriminating, you may still have options. In this article I will be discussing another important topic – the fact that you have the right to remain silent when dealing with law enforcement.

The Fifth Amendment’s Miranda decision protects a citizen when they are in “police custody.” A person will be considered in such custody when an average reasonable person of similar circumstances would not feel free to leave. This means, for example, that if the defendant is a seventeen-year-old with a below average IQ then the question of whether they felt free to leave will be gauged from the perspective of such a person and not an average adult. If one is in custody, then law enforcement must advise them of their right to remain silent before beginning an interview or interrogation. If questions are asked without this warning, then a violation of the Fifth Amendment will have occurred.

It is important to understand that a person in custody may waive their right to remain silent. If they waive this right then any statements made to the police will be admissible in Court. A waiver will only be valid if the defendant “knowingly, intelligently, and voluntarily” gave up their rights. This means, among other things, that police may not intimidate or coerce a defendant into speaking. Whether a waiver was valid will always be determined on the very specific facts of each case and challenging the admission of statements can often be a complicated area of law.

It is important to understand that the Fifth Amendment applies to situations where a person does not feel free to leave the presence of law enforcement. This means that the Amendment does not apply to situations where the individual is free to leave and does not feel compelled to speak with the police. This means, therefore, that if law enforcement wishes to ask you a question which you do not wish to answer then you may decline to do so if you are not being compelled to stay. In other words, police interactions can be broken down into two categories. The first being situations in which a person may not leave the presence of law enforcement (a situation in which one may not be compelled to speak with the police without a lawyer present). The second of these categories include more casual interactions with law enforcement where the individual is not in custody and is under no obligation to speak with the officers; individuals may simply walk away from such an encounter.

If you have been arrested after speaking with law enforcement then it is important that you consult an attorney and learn how the Fifth Amendment applies to your situation. Contact my office today to speak with an attorney. In addition to Phoenix I also assist Maricopa County areas such as Mesa, Glendale, Scottsdale, Chandler, and Gilbert as well as Pima County residents in Tucson.