Did Phoenix Police Violate Your Right To Remain Silent? 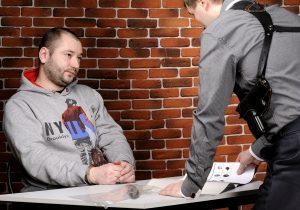 This is the first post in a series which discusses the commonly asked question of “did police violate my right to remain silent?” I am writing on this topic due to the fact that the right against self-incrimination, which is guaranteed under Miranda v. Arizona, is a commonly misunderstood area of law. While many understand that they have the right to remain silent, they are often mistaken as to the extent of that right and when it applies. The goal of my coming posts is to provide information which will help the accused to better understand their situation. It cannot be stressed enough that you should contact a criminal defense attorney immediately if you have been arrested and that you should never speak to the police about any criminal matter without an attorney present.

I will be discussing multiple issues over my coming articles. These topics will include:

These are important topics for Phoenix area defendants to understand. First, many make the mistake of thinking that they have the right to remain silent any time they interact with the police. The fact of the matter is that the right only applies when one is the custody of the police; for the purposes of Miranda issues “custody” is given a very specific definition. That being said, you always have the right to refuse to answer a police officer’s questions and it is almost always in your best interest to do so, even if you are not technically in “custody.” I have found time and again that speaking to the police about a criminal matter can ONLY make matters worse for you. Second, an officer violating the right may lead to statements being excluded from Court and certain evidence also being excluded from proceedings. Third, there are many instances, such as cases which involve domestic assault, in which Fifth Amendment violations may be a critical component of one’s defense. Finally, it is important to understand the process for challenging the admission of illegally obtained statements.

It is imperative that you retain an experienced attorney to assist you if you have been arrested and you made statements to the police. All too often a defendant may think that there is nothing they can do about the situation due to the fact that they already spoke with law enforcement. Such is not the case. The Fifth Amendment, however, is a complicated area of law and it is important that you hire a lawyer who understands these types of issues.

I assist defendants throughout the Phoenix area and believe that everyone is entitled to the most aggressive level of representation. Contact my office today to schedule an initial consultation. I also represent defendants in other Maricopa County cities such as Mesa, Glendale, Scottsdale, Chandler, and Gilbert. We also assist Pima County residents in Tucson.